Red Ahead for this Black Eye of the Green Rush

In a move that has been signaled by a brewing battle, Medbox (MDBX) founder and controlling shareholder Vincent Mehdizadeh moved today to replace the entire Board of Directors.  In a definitive proxy filed with the SEC, Mehdizadeh named himself, employees Matthew Feinstein (who was a director until December) and Jaime Ortega, and outsider David Trecek, effective on 1/29, ousting from the Board CEO Guy Marsala and the three independent directors, Mitch Lowe, Jennifer Love and Chairman Ned Siegel.  While sometimes change is good, this is likely to crush the stock and scare off many of the institutions that have been investing in and supporting the stock.

The conflict between the founder and the team he picked to run the company became evident after the company issued an 8-K filing disassociating itself from an unauthorized press release that he issued in early November. Mehdizadeh first alluded to the action taken today when he filed an amended 13-D last month, stating that "The Reporting Person has notified the Issuer’s board of directors that he may seek a change in the present board of directors or management."  His own press release issued last week explained his dissatisfaction with the Board's handling of the financial restatement:

Recent events have caused me to call into question whether current management and the board of directors has enough industry experience to properly run this company. It is for this reason that I will be adding industry-experienced members to the board to work with the current board members to more effectively operate the company. I will also be taking a more active role with the company again to ensure our short-term and long-term goals can be achieved.

Apparently the CEO and the three independent directors were not willing to work with the new group.

MDBX is already a shadow of its former glory in the market at about $6 per share, up from a recent two-year low of $4.25 set in December, but the market cap is still about $285mm including the conversion of 3mm convertible preferred shares (5:1).  The company has seen its financials implode, with revenue in the most recently reported quarter (Q3) declining 95%.  The company is in the middle of a restatement process and is negotiating its convertible debt - the lenders had agreed to forbearance as the issue could have led to default.

The stock just enjoyed a nice bounce as the year closed out: 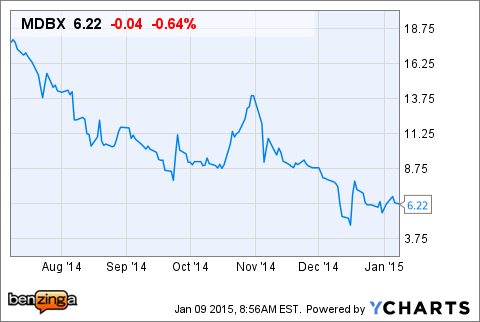 But a longer-term perspective tells the story better: 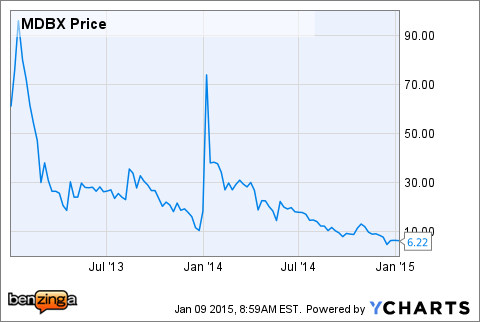 Investing in marijuana stocks is not an easy task.  Many investors gravitate towards the well-known names with longer trading histories, but the experience over the past two years with MDBX illustrates the danger in that approach.  In 2014, the company began to transform and was improving in many ways.  In one quick move, all of this progress is now at risk of being reversed.  Expect new CEO Guy Marsala to be replaced, and one has to wonder how the convertible note holders, who could hold the company in default due to the financial restatements, will react.  Finally, all investors should be aware of the risk of a single individual controlling a company, as that person can unilaterally make changes without the consent of shareholders.

By rubensteinsam — 3 weeks ago
Great info
See All Reviews →
×